Take Route 711 North - be sure to drive AT LEAST 10 MILES NORTH OF LIGONIER, going past Champion Lakes Golf Course (on left), The Real McCoy\'s (on right), Penna. State Game Commission (on right) & Sower's Tire (on left). Turn left after reaching the very top of Fairfield Hill.

Take Route 711 South - be sure to drive at least 3.5 miles south of New Florence from intersection (by Uni-Mart), going past Laurel Valley Elementary (on right), Mirror Lake (on right) & Fairfield Fire Hall (on left). Take second right over crest of Fairfield Hill.

​On September 11, 1967, the West Fairfield Township Volunteer Fire Company No. 1 purchased the building from the defunct WFMC organization for $500.00. They added a garage, indoor rest rooms, a kitchen and installed oil heat (to replace the pot belly stove that was used by the church for heat). As a note of interest, the building was damaged by fire on at least two occasions prior to its purchase by the Fire Company. Evidence of these fires is still visible in the ceiling and attic of the building.

How Her Services Will Benefit You.

​On April 20, 1971, Harry R. Boring, a retired U.S. Army Lt. Colonel, and Auctioneer, purchased the building from the West Fairfield Volunteer Fire Company. He ran the first auction in 1972. The first item sold across the auction block was a blue canning jar with a glass lid. Beginning in 1973, auctions were held on a regular basis and continue to this day. 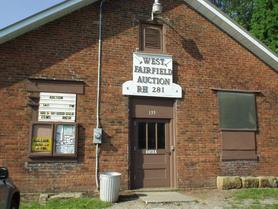 Kathleen M Mack Auctioneer
You can feel comfortable calling me

The West Fairfield Auction Barn was initially built to be the home of the West Fairfield Methodist Church in the year 1789. The church was first organized in the mid 1700’s. At its peak, the church had a congregation of over 150. The structure was made of locally hand-manufactured bricks. Many of the bricks contain the paw prints of the local pets (dogs and cats) that walked on them before they were completely dried. The labor came from volunteer members of the congregation. The mortar consists of sand and lime. The plaster interior walls contain large amounts of horsehair. This type of structure is very resilient and durable. It can last much longer than hard concrete, which cracks with the settling of the building. 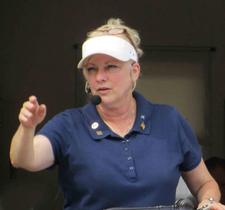